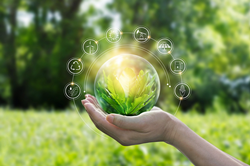 Rapid advances in technology and population are driving the growing demand for energy, raising concerns about the sustainability of conventional energy sources. The renewable energy sector has progressed but is still insufficient to supply only industrial sectors in the world. HashCash Consultants CEO Raj Chowdhury highlights the merits of blockchain in this industry, highlighting areas of implementation to address the growing list of challenges through optimization, cost reduction, and elimination of middlemen.

The UN reports that the world’s total energy supply has increased by more than 68% to reach 601.7 EJ in 3 decades from 1990. Coal, oil and natural gas are still the main fuels used, accounting for more of 490 EJ of the total energy supply. Sudden change will bring the world to a standstill, which is why global thought leaders are advocating for optimized use of energy in addition to relying on renewable sources. Blockchain, a distributed ledger technology (DLT), is proving invaluable in increasing productivity across multiple sectors of the energy supply chain.

Areas where blockchain has already had a significant impact include peer-to-peer energy trading, energy data management, commodity trading, and even the oil and gas industry. Technology has been a game-changer in supply chains around the world, and a conscious decision to harness its potential while keeping the environment and sustainability in mind will benefit all segments.

“Blockchain is already being used to build trading platforms for commodities and energy. Data stored in blockchains is transparent and validated by majority consensus removing the risk of error or fraud. It is also being actively considered to build micro-grids with distributed energy resources,” said Chowdhury, who previously highlighted blockchain’s potential for carbon reduction and viable climate technology solutions.

Led by Chowdhury, HashCash has been a global leader that has won top awards for blockchain development. The US-based company has deployed blockchain solutions in over 26 countries across 5 continents, including the US and Singapore. HashCash strives to bring about positive change through innovation, trust and transparency and has currently announced expansion plans in the Middle East and India.

Blockchain as a technology is disrupting the energy sector, increasing productivity, and attracting investment for research and implementation worldwide. Organizations will continue to leverage growth and business opportunities through blockchain, even more so in the years to come.

Raj Chowdhury is the Managing Director of HashCash Consultants and a Blockchain pioneer. Raj pioneered the first interbank implementation of blockchain technology trade finance and remittance transfers between two of the world’s largest banks. Raj is a leading voice in the Blockchain and Cryptocurrency space and actively engages with policy makers in this area. He is a contributor to Economic Times, Business World and CNNMoney and advises industry leaders on Blockchain adoption. He is a member of Asha Silicon Valley, a non-profit association committed to the education of children in emerging countries. Author of the book “The Dark Secret of the Silicon Valley”, Raj is an investor in blockchain and cryptocurrency companies and an active member of the philanthropic community.

Share the article on social networks or by e-mail:

Single.Earth to replace carbon credits in the blockchain