Everything you need to know about the forex market in your daily roundup, with the latest macro trends, charts and trading information…

After a quiet morning European trading session, the US dollar rallied on the release of the ISM Services PMI, which beat expectations in July (56.7 vs. 53.5) and rose against June (55.3).

The immediate effect on the market trickled down to the USD/JPY pair, which now trades as an indicator of US rate expectations. The Japanese Yen was the worst performer of the day, with USD/JPY gaining 0.9% and crossing the 134 level, after gaining 1.2% the previous day. EUR/USD and GBP/USD also turned red after the release.

Today, St. Louis Fed President James Bullard delivered another hawkish message, saying he preferred early rate hikes and still expects interest rates to rise by 3 .75 to 4% this year, while the Fed’s Mary Daly said she favored a rate of 50 basis points. hike in September. Fed-linked interest rate futures now show a 50% chance of a 75 basis point rise in September, while an early 2023 rate cut that had been set for the week last, now seems less likely. 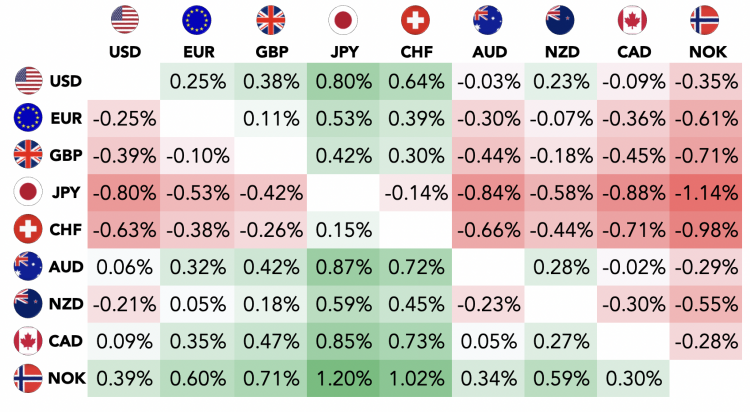 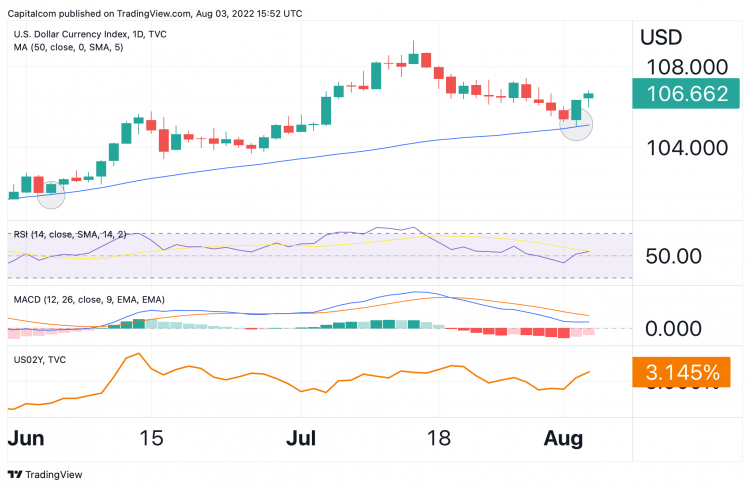 Chart analysis of the US Dollar Index (DXY) as of August 3, 2022 – Photo: Capital.com / Source: Tradingview

The US Dollar Index (DXY) effectively bounced off the 50-day moving average support at the psychological level of 105 yesterday, to extend its uptrend today after better than expected ISM Service data.

The move was helped by a rise in short rates, reflecting a more hawkish Fed, with the 2yr again above 3%, and standing at 3.15% at the time of writing.

In early June, the DXY also bounced off the 50dma, paving the way for a 7.7% rally through mid-July. Price momentum is regaining momentum, with the RSI crossing above 50 and the MACD line attempting to bottom out.

The next resistance levels are at the psychological level of 107, followed by 107.4 (27th July high). On the downside, 106 (August 3 low) looks like strong near-term support, as long as macro data continues to show strong economic resilience. 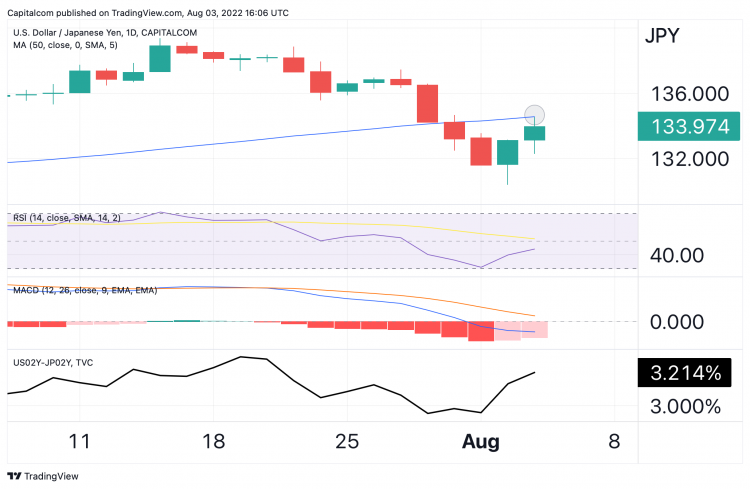 The dollar-yen exchange rate rose almost 3% after hitting 130.5 levels yesterday, but fell back on the 50-dma test today.

The USD/JPY pair continues to be heavily influenced by the yield spreads between US Treasuries and Japanese government bonds.

The 2-year spread rebounded to 3.22% (or 325 basis points) putting upward pressure on USD/JPY which jumped above 134 immediately after the release of ISM data for utilities. United States.

The short-term bearish price momentum of the past few weeks is now running out of steam, as the daily RSI quickly rebounded after just touching oversold levels, and after the MACD failed to extend further to the decrease. A successful break of the 50dma at 134.5 could lead to a test of resistance at 136.6. (high of July 28).

What is your sentiment on AUD/USD?

Vote to see the sentiment of traders! 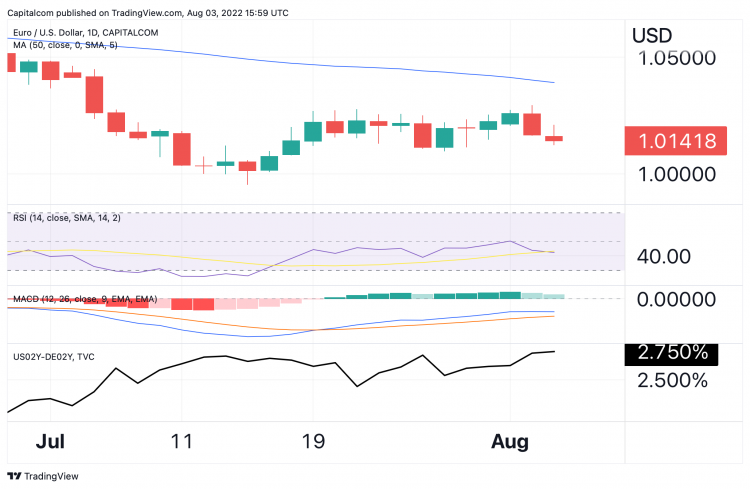 EUR/USD fell back to 1.024, down for the second day in a row, as price action returns to better reflect diverging macro fundamentals between the US and Europe.

Despite the technical recession, economic activity in the United States remains robust, particularly in the services sector, while a recession threatens the eurozone following weak PMI and consumer confidence figures.

The short-term interest rate differential between the United States and Germany increased to 2.78% (or 2378 basis points), the highest level since the end of May 2019, as the market continues to expect to a more hawkish Federal Reserve than the ECB, which faces a difficult fall and winter in terms of economic growth

The support at 1.01 is already a litmus test for the parity. A break down there would open the way to a return to parity. A higher than expected US non-farm payroll outflow on Friday could already be the catalyst for EUR/USD to revise the 1.00 mark. 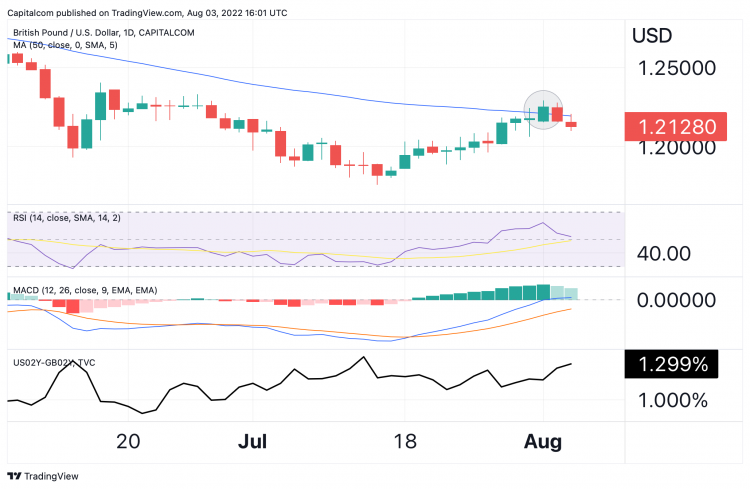 The pound (GBP/USD) returned to 1.212, not confirming the break-up of the 50-dma average at 1.22, with a downward momentum in recent hours.

The RSI is approaching 50 from above and the MACD is reluctant to decisively cross the zero line.

Yield differentials between 2-year Treasury bills and gilts have increased to 1.3% (130 basis points) since mid-July.

The Pound is now expecting the BoE tomorrow, although a 50 basis point rise now seems already discounted by market participants. GBP Traders will be keeping a close eye on the BoE’s growth outlook and how quickly the board expects inflation to fall from its fall peak.

A more hawkish stance from the Bank of England (perhaps signaling a similar 50bp increase in September) could set the stage for a retest of 1.22. If the BoE announces a “accommodative rise” (indicating a more data dependent approach for upcoming meetings), 1.20 support could be tested.

Performance of currency pairs as of August 3, 2022

Three Tips for Trading the Harmonic Bat Pattern in Forex

How has AI transformed Forex trading?